As Formula 1 introduced a raft of changes ahead of the new season, 2017 was always likely to produce some new features on the aerodynamic front. Here are some of the key highlights from this year.

The appearance of T-wings on this year’s cars is a consequence of the changing of the rear wing dimensions for 2017. During the rewriting of the rules a small region that was previously occupied by the outgoing higher rear wings was accidently left unattended. The extruded 50 x 750 mm area was instantly taken advantage of by the teams, with the majority of them converging on some form of twin element design by mid-season.

END_OF_DOCUMENT_TOKEN_TO_BE_REPLACED

I don’t normally cover testing anymore but a big thank you to Charlie Stephenson (@myboringhandle) for letting me use some excellent photos he took from Barcelona last week. This short blog post will cover some general tech themes to look out for in 2017 and who I think is the fastest after the first test.

Love them or hate them, shark fins are (probably (depending on what Ross Brawn has to say in the near future)) here to stay this season. The lower and wider rear wings are in the firing line of  the turbulent wake coming off the front tyres and front wing, so a fin is used to manage the air over the rear of the car. They are particularly useful in yaw situations as the car’s wheels are turning and the wake is blocked from washing over the rear wing by the large bodywork.

Mercedes have taken things a step further by integrating a chimney into their fin – a small opening has been made into the top to cool the internals. Whilst the internal aero won’t so much be pushing hot air through it, the freestream flow above the car will pull out the higher pressure air inside the car.

Then there’s the addition of T-wings. Funnily enough, this area of the car has been opened up completely by accident. Up until October there was no bounding box to allow for such devices but in the final release of the regulations somebody made a boo-boo and, of course, the teams have exploited it. T-wings are tiny winglets that help tidy up airflow ahead of the rear wing, kicking air upwards to help the aerostructures at the rear of the car. Williams (above image) have even put two devices on the car whilst Mercedes (below) have doubled them up to induce a greater effect.

The Mercedes version bends over at the wing tips to prevent vortices forming, although some teams may actually prefer an open ended solution. Standalone devices such as on the Mercedes look ridiculous in my opinion but I’m not overly fussed if they sprout from the fin. This area of the car could be festooned with winglets and vanes by mid-season if the situation isn’t nipped in the bud soon.

We haven’t seen anything too outlandish in terms of sensors so far but the usual methods of checking whether on-track data aligns with that seen in the factory were very much evident at the first test. 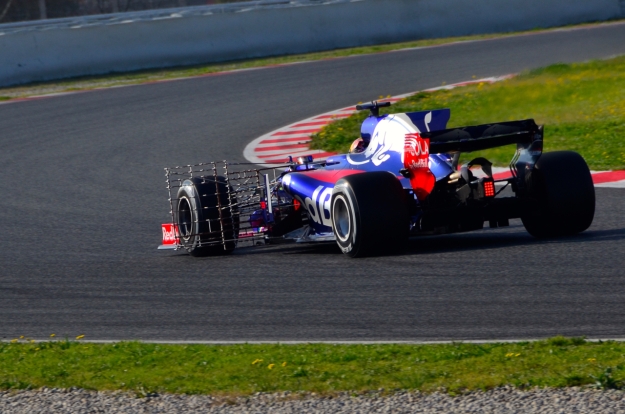 The larger front tyres have resulted in complex bargeboards and turning vanes to shield the sidepods and floor from turbulence. Large pitot tube arrays are mounted behind the tyre to assess the pressure and velocity of the wake and how it changes in cornering situations. This data can then be used to develop new aero devices around the cockpit, or adjusted to suit a new front wing design.

Flow-visualisation paint (or flo-viz) is a paraffin based liquid that is used to map airflow over the car’s surface. This is particularly useful for getting a baseline understanding of how the air is being influenced by the car’s bodywork on track, which can be compared to flo-viz tests in the wind tunnel and stream traces in CFD simulations. It can also identify areas of flow separation.

The Force India above is absolutely plastered with the stuff. Use of the same colour can be quite revealing to prying eyes, especially in large quantities. Teams can also use various colour combinations of flo-viz to check for cross flow from different parts of the car.

Rake angle is the car’s front down, bottom up attitude relative to the track surface, and increasing this angle has huge benefits. Getting the splitter at the front of the car closer to the floor induces high speed flow along the floor, while a higher rear end essentially creates a larger diffuser for air to expand from. This combination produces a lot more downforce without a huge drag penalty – even a few millimeters of additional rake brings incredible performance gains.

OK, so why aren’t all the teams jacking up the rear ride height? Well, as rake angle goes up, the sides of the floor move away from the ground, which reduces ground effect as low pressure leaks from the underfloor. To increase rake angle you must also seal the floor using complex aerostructures that stem from the front wing. We often talk about the Y250 vortex for a reason: a stable vortex that can span a great distance along the car will improve the seal. The larger 2017 bargeboards and turning vanes will also help prevent high velocity flow escaping.

Red Bull have long been the kings of using rake as their underlying aerodynamic concept. The relative simplicity of the RB13 compared to the Mercedes and the Ferrari should not be a sign of the team’s lack of creativity around the new regulations, as getting the car to sit the way it does in the above image takes a lot of work. Less complex bodywork will also decrease drag, an area that Red Bull have been working hard on in recent years.

Although not quite as extreme as Red Bull, Ferrari are one of a number of teams that have also pursued extra rake to find more downforce. As you can see above, there is ever-increasing daylight between the car and the track the further rearward you look. 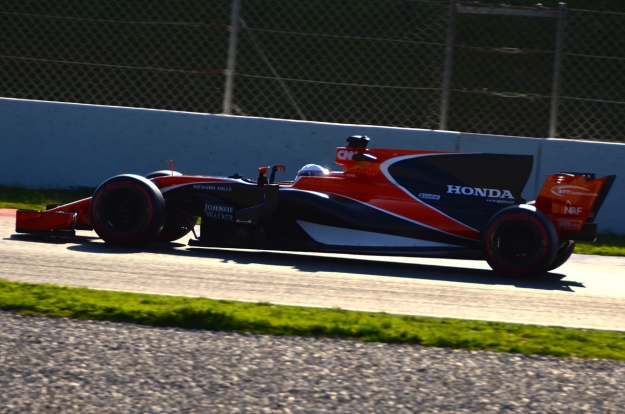 McLaren stole Peter Prodromou from Red Bull in 2014 and his influence on the design of the car has become clearer over the past two seasons. Prodromou was Adrian Newey’s right hand man at Red Bull during their prime and his presence in Woking has definitely been felt judging by the MCL32 chassis design. Beautiful front wings, high rake angle and a degree of simplicity are all Red Bull trademarks finding their way onto the Woking cars. It’s a pity that Honda appear to be bloody useless again this year, but let’s wait and see on that…

So, who’s fastest at the moment?

Mercedes. Yes, they grabbed the headline time on Ultra-softs but their impressive long run pace and awesome reliability show just how mighty this team really are. I must admit that Ferrari have also looked pretty good so far and I’ve been impressed by Renault. Perhaps I’ll have a review of things next week to form a full pecking order before Melbourne. God, I’m excited!