Although it has not cropped up extensively in the media, braking (in particular brake bias and control) will be an important design consideration for 2014. This is down to the introduction of the new power units, which – due to the additional recovery power of the MGU-K – makes the bias difficult to adjust and control.

In this section of this post I am going to break (pardon the pun) down the key characteristics of the current (2009-2013) braking system and how each component affects each other.

Since 2009 (excluding 2010), Formula 1 has utilised the Kinetic Energy Recovery System (KERS) that increases the efficiency of the braking system, transferring the previously lost energy to a battery. This energy can then be used to provide an additional boost of power at the driver’s disposal for 6.67 seconds per lap. The KERS harvests 60kW of power, which equates to about 80bhp – about the same power as a small family hatchback car.

END_OF_DOCUMENT_TOKEN_TO_BE_REPLACED 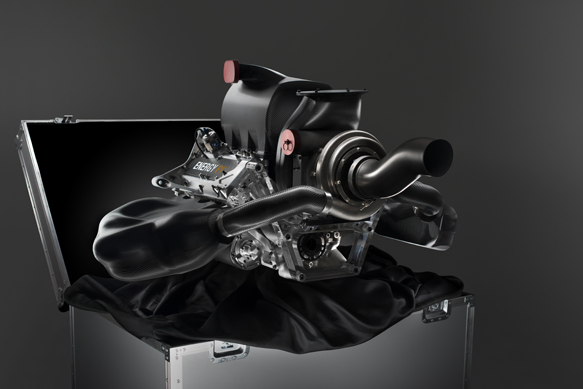 2014 presents the biggest change to Formula 1 cars since the late 1980s: gone are the naturally aspirated 2.4 litre V8 engines and in their place a 1.6 litre V6 turbo is introduced. To make matters more complex the engine manufacturers must apply complex energy recovery systems to boost power output, reduce fuel consumption and further reduce the number of engines allowed per driver per season to lower costs. The idea behind this is to bring F1 technology more in line with road car development.

The last time turbo power was in F1 was during the 1988 season. Honda dominated this era with McLaren, using a 1.5 litre V6 in the famous MP4/4 before being replaced by a 3.5 litre naturally aspirated engines for the following season. Technology has moved on drastically since then. The 2014 power units have the potential to decide the world championship such is their importance. The manufacturer who meets their side of the bargain will have a huge upper hand on the opposition. They are therefore the most likely component to give the biggest performance factor.

What are Power Units?

The engineers no longer refer to the next generation of F1 powertrain as “engines”. They are now dubbed as “power units”. The reason behind this being that the powertrain is made up of more than just a combustion engine/turbo, there are more complex elements involved from this season onwards. The recovery systems on board will generate enough energy to supply plenty of extra kick via an electric motor, with the additional power output mapped into the engine system to provide more performance at optimal stages of the lap (i.e. the driver will no longer have to push a button to use the additional power available).

Let’s get into the numbers, starting with the turbo-charged engine itself.

*Estimated figure. Rumours of some manufacturers extracting a higher power output (notably Mercedes) at this stage of development.

END_OF_DOCUMENT_TOKEN_TO_BE_REPLACED

In the run up to my next post on 2014 – the power units – I decided to do a brief post on turbochargers (or turbos) as this will be the backbone of next year’s engines. 2014 sees the introduction of 1.6 litre V6 turbo engines, replacing the naturally aspirated 2.4 litre V8. This post should be beneficial, both for you and myself, as to how the turbocharger works in conjunction with the engine and why it is more efficient than a naturally aspirated engine. So let’s jump in…

What is a turbocharger?

A turbocharger is basically a small turbine that acts as a pump. The turbo itself can vary in weight as it also varies in size, however a typical road car unit can weigh in the region of 15-25kg. The mass of the entire system can be weigh as much as 30kg or even more.

The turbo is composed of two channels: the exhaust inlet and the compressor inlet. Each channel contains one section of a turbine. In the image below you can see a cutaway of the turbo unit, showing the turbine running through the two channels. The turbine rotors are connected via a shaft on a bearing system, with oil passing through the system to provide lubrication.

How does it work?

In a naturally aspirated engine fuel and oxygen undergo combustion in the cylinders, creating exhaust gases at the end of this process. The gases then pass through the exit valve, through the manifold and out of the car via the exhaust exit pipe. Installing a turbo is a great way of boosting a car’s efficiency and performance as it takes advantage of these wasted gases.

After the exhaust manifold a turbo unit can be put into the network, passing the exhaust gases into one of the channels which contains one section of the turbine. After the exhaust manifold, the pipe network converges exhaust gases from multiple cylinders into one pipe, so there is quite a large volume of gas passing through the pipe at a relatively high velocity. Such is the energy of these gases that they can drive the turbine in the turbo unit.

As the two turbine rotors are connected via a shaft, when one is turned so does the other. When the exhaust gases pass over one of the rotors – turning turbine in the process – this in turn spins the rotor on the compressor side. Once the gases have passed over the rotor in the exhaust channel they are then discharged, sent to the exhaust pipe and exit out of the engine.

The compressor channel rotor is open to the surrounding air. The spinning motion of the rotor generated by the energy from the exhaust gases forces air into the compressor inlet. This air is then sent through the channel along another pipe network to the air intake valve in the cylinder via an intercooler. Additional airflow combined with the fuel results in a better combustion and therefore extracts more power out of the engine.

As more exhaust gases come through the system as engine speed increases, the speed of the turbine also increases. In some performance cars the turbine can spin at over 240,000rpm although next year’s F1 V6 turbos will be limited to 125,000rpm.

A 7-step illustration of how a turbo works

Exhaust gases can be in excess of 900 degrees Celsius as they enter the turbo, so building the system out of heat resistant materials is essential. If the heat from the gases is not dealt with correctly, there are a number of issues that can have an impact on the performance of the car, including reducing the life-span of the turbo unit itself.

To extract maximum power from the engine, cooler air is favoured over hot air as it is denser. Denser air is packed with more oxygen molecules and therefore more efficient combustion occurs within the combustion chamber, providing more power.

There are two types of intercoolers: air-to-air and air-to-water. Air-to-air refers to oncoming airflow passing through the intercooler, cooling the hotter airflow – that originates from the compressor intake of the turbo unit – on its way to the cylinder. Air-to-water is slightly different in that oncoming airflow is used to cool a water bath, in which lies the pipe that passes hot compressor intake air to the cylinder.

Another small consequence of hot air from the compressor intake is engine knocking. If hot air enters the combustion chamber the fuel can ignite, even if the spark – produced by the spark plug – is inactive. This causes engine knocking which can cause cylinder head and piston failure within the engine although this is only occurs at extreme air temperatures. 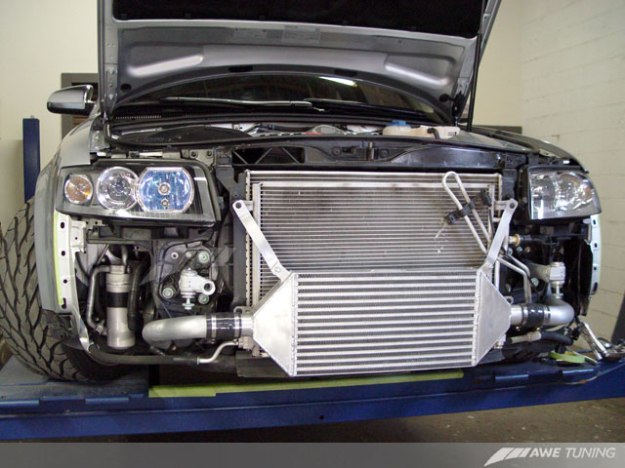 Performance turbo engines are slightly less predictable to drive than naturally aspirated engines as the turbo provides a “boost”. At low engine rpm, little exhaust gases are being produced and therefore the turbine rotates much slower. This reduces the air intake into the cylinder as the exhaust flow is providing little energy to drive the turbine. As engine speed increases, the turbine rotates faster and therefore power output is almost exponential.

If a large volume of exhaust gases are travelling through the turbo system, it can over-boost the engine by spinning the turbine too quickly. This can be particularly problematic in wet conditions as there can be power surges that can catch the driver out. To reduce this problem, the turbo is fitted with a waste gate. A waste gate is a valve that allows the exhaust to bypass the turbo once a certain pressure is met within the system. This excess exhaust then travels into the exhaust pipe and exits the engine.

Having a waste gate allows a smaller rotor to be used in the exhaust channel of the turbo unit. This is because a large volume of exhaust gases needs a larger turbine to not over-boost the engine at high rpm. A smaller rotor allows maximum power output to still be achieved whilst also reducing weight. Engine response is also increased as a smaller rotor has a smaller inertia, allowing the turbine to accelerate more quickly, driving air through the compressor and into the cylinders at a faster rate.

Low engine rpm and/or larger rotors can cause “turbo-lag” as there are not enough exhaust gases to drive the turbine, reducing power output. One of Ayrton Senna’s most renowned driving techniques was to blip the throttle mid-corner, passing exhaust gases through the system, spooling the turbo and therefore reducing turbo-lag as he exited the corner.

An open waste gate valve next to the exhaust channel turbine

Next year’s F1 turbos will not include a waste gate. More on this in my 2014 power units post later this week.