Time to kick this blog back into life a little now that I’m free for summer, and what better a way of doing so than looking at some of the great tech on display at the Goodwood Festival of Speed. This year’s festival was probably the best one I’ve been to out of the four or five times I’ve visited, not least because we had a great spot on the hillclimb to view the cars – on the inside of Molecomb corner along the braking zone right by the hay bales. Mercedes brought the W05 F1 car too, making them the first team to use a new hybrid-era car for demo purposes. 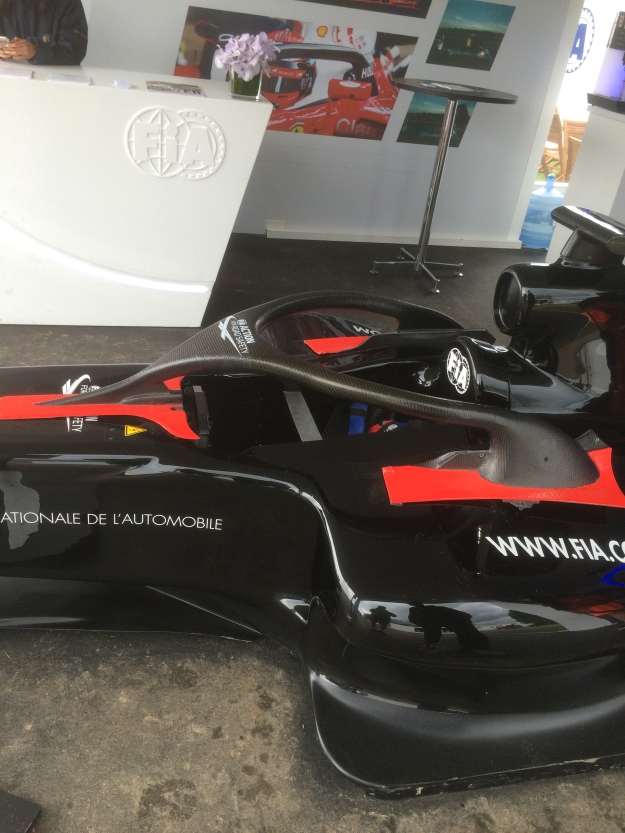 First stop was the FIA stand, which was filled with some interesting information about motorsport in general as well as a few desirable racing cars.

I knew what was going to be on display there, too – the halo concept that F1 wants to introduce next season was the first thing that caught my attention as I approached. Unfortunately, rather than putting in the effort of actually integrating the halo with the car, the structure had clearly been pinched from Ferrari (they tested it pre-season) and quite literally been stuck to an old monocoque.

The halo device was pioneered by Mercedes and has since been interpreted by Ferrari. The design above weighs around 5kg and is probably made from titanium or alloy steel with a layer of carbon fibre sheets wrapped around the hollow tubing for aesthetic and practical reasons (e.g. provides a ‘grip’ so the driver can use it as a support when entering/exiting the cockpit).

I managed to grab this ‘drivers view’ shot whilst I was there too. Visibility isn’t bad at all- it only affects the centreline view, which will only be of slight irritation to the driver. In fact the view looks remarkably similar to that of Tom Dillmann in the Formula V8, which I edited back in February to include the halo.

Quite possibly the view #F1 drivers will have in 2017 with the new 'halo' protection. pic.twitter.com/v2U658GWPb

In my personal opinion I think the halo is a rubbish concept. There has to be a better way of implementing better safety standards with an aesthetically pleasing design. That might involve tearing up the current regulations and doing a complete redesign of the chassis (not just the aerodynamic surfaces), but if that is the future of F1 then so be it. I’d rather see the Red Bull aeroscreen receive further development than stick with the halo but inevitably there will be some form of head protection whether we like it or not.

Further along the FIA stand lay the 2015 Toro Rosso STR10, and what a beautiful machine it is. Formula 1 cars can only fully be appreciated when seen up close in person: the attention to detail and finish on them blows me away.

As you will know from previous posts on this blog, the front wing is such a delicate area of the car and one where a lot of attention is given. The STR wing is composed of new fewer than six elements for airflow to pass over and generate downforce, whilst the neat flicks, vanes and the general outward turning profile of the wing pulls air around the front tyre behind. As is common on most front wings today, a small infrared camera (mounted inside a bulb) is mounted on a stalk from the cascade winglet to monitor the front tyre’s surface temperature.

Moving on from there I went to the consumer car stands where there is always plenty see and do at Goodwood. Tesla – a company I follow very closely – were at the festival for the first time (from what I can recall) although they did not have their new Model 3 on display. The older and new generation Model S were out for the public to see and touch, alongside the Model X with its clever gullwing doors (known as ‘falcon doors’) that utilise sensors to avoid hitting objects in close proximity when opening.

There was also a stripped down Model S rolling chassis, with the suspension, motors and steering components revealed. 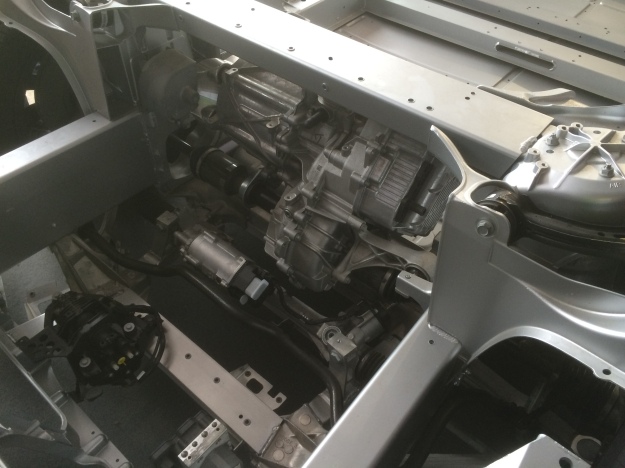 The baseline Model S has just the one motor generator unit at the back of the car to power the rear wheels, however the image above shows the front end of the dual motor Model S. This is the front motor assembly, lying horizontally in parallel with the front axle, and is much smaller than the rear unit as it is doing less work on the axle under braking than the rear. The advantage of keeping its size to minimum is increased room in the front luggage space and preventing any intrusion into the batteries that lie along the floor of the car.

I expect the launch of the Model 3 will catapult Tesla into a leading car manufacturer and it’s exciting to see a fresh take on the car being designed and built to such high standards and an ever-decreasing price bracket for the public. 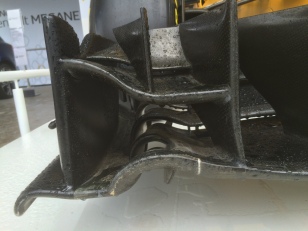 More front wing tech courtesy of Renault, who had a replica Lotus E23 at the front of their stand. The multiple arched element design is in line with current trend however it is not as refined as the likes of Mercedes, Red Bull or indeed the Toro Rosso wing mentioned earlier. It looks like a collection of ideas stuck together rather than a cohesive design, which is probably indicative of their current financial situation and where the team are mentally after effectively signing 2016 off recently.

After watching some of the classic cars make their way up the hill climb, I then headed to the top of the hill (via a very entertaining/bumpy/drifty tractor ride) to watch the rally cars. I’d never really got into rallying but I nevertheless enjoy looking at the cars – some of the design ideas on them are, by lack of a better word, industrial! Having said that, they probably have to be a bit less refined at the expense of being more robust given the torture they go through.

For example, here is the 1984 Audi Quattro S1 and check out the placement of this radiator: slap bang beneath the rear wing, which completely defeats the object of having a wing there in the first place! I’d probably call it more of a rear spoiler but besides, to finish first first you must finish, and this is a clear example of that. 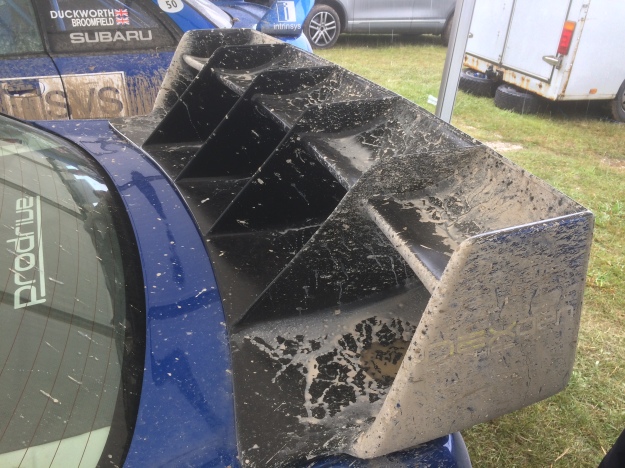 Continuing with the theme of rear wings, here is Subaru’s Impreza STi WRX from 2004. The strakes that interrupt the wing’s profile are there to stop airflow spilling across the wing as the car turns. Why aren’t these in F1 then? Well they do crop up every now and then, but they’re mostly effective in rallying because the car spends a lot of the time sideways. Air washing across the surface rather than moving perpendicularly along doesn’t produce sufficient downforce, so the strakes are added to guide the air over the wing.

On this mid-engined 1986 Ford RS200 we can see a general cooling intake into the engine bay area (lower inlet) and an upper inlet for the turbocharger, all on the right hand side of the car. The air is then fed from the turbo back upwards to an air-to-air intercooler that is mounted horizontally along the roof line, tucked inside a thin roof scoop, before then being transferred into the four cylinders on the left side of the car.

Again, I love the shear simplicity of the system and how easy it is to see the engineering at work. Quite often when looking at the internals of modern F1 machinery it is difficult to spot how everything links together – it is taking me an age to complete drawings and fully write up a piece on the 2016 Ferrari power unit.

On the way back down the hill was the Porsche marquee and above is their 2015 Le Mans winning 919 Hybrid (I didn’t spot the 2016 winner but I imagine they’d feel pretty guilty about showing that one off given the circumstances of their victory). You can see from this angle how the airflow is funneled from the nose of the car through various channels before exiting along the sides.

Not only do these tunnels provide a good way of cutting drag by removing blockage at the front, they also allow the splitter to work harder. This air can then be used to manage the rear tyre wake as it is projected immediately into the wheel arch behind.

LMP1 is a category I continue to watch with great interest: the technology in these cars is virtually on par with those in F1 and gets far less coverage/insight. If you’d like to see more analysis on these cars let me know – I did on the ambitious Nissan GT-R LM NISMO last year.

That concludes this blog post on some of the tech at Goodwood. If you have any suggestions on what you might want to see on this blog in the future please do leave a comment on any of my posts or find me on social media!