With changes made to the Interlagos circuit’s kerbs (now 50mm higher in places) and the track conditions affected by the weather conditions last year, Pirelli’s pre-race assessment suggested a substantial drop in laptime. This laptime deficit turned out to be over a second over 2014, with Nico Rosberg’s average speed through turns one and two being 15kph slower on his pole lap than the previous year emphasising the alterations on track.

Whilst this will have required some rethinking on the mechanical side of the setup, aero also has a key role in Brazil. Although the altitude of roughly 800m above sea level is a far cry from that of Mexico a few weeks’ ago, it still has a significant impact on the aerodynamic levels of the car and the performance of the power units.

This has meant that the teams have changed a few items on the car despite it being the latter stages of the season. We also got to see the performance of Renault’s “upgraded” power unit (you will understand why I quote that later) and Mercedes had an intriguing test device on show. Let’s find out more on this now…

As the season begins to draw to a close, it becomes more obvious that the teams’ attentions have been diverted to 2016. Whilst this means that there are fewer developments added to the current cars, there are often experimental components that are run to assess how the design of next year’s car is coming along.

Mercedes are the first to provide clues as to what is in store on the W07, by trialing what appeared to be an S-duct during free practice on Friday.

The S-duct was pioneered by Sauber in 2013 when stepped noses were in use and has since been copied by Red Bull, McLaren and Force India. Toro Rosso have also briefly used a version of their own, too.

Its purpose is to channel airflow from beneath the chassis up to the top side and over the top of the front bulkhead through an ‘s’ shaped duct. It makes use of slightly slower boundary layer flow beneath the car, exiting into generally untidy air and keeping flow attached to the top of the car. The device allows for more extreme nose designs, which is why they are not necessarily a bolt-on performance part – they act as a link between different aero structures around the centreline at the front of the car. 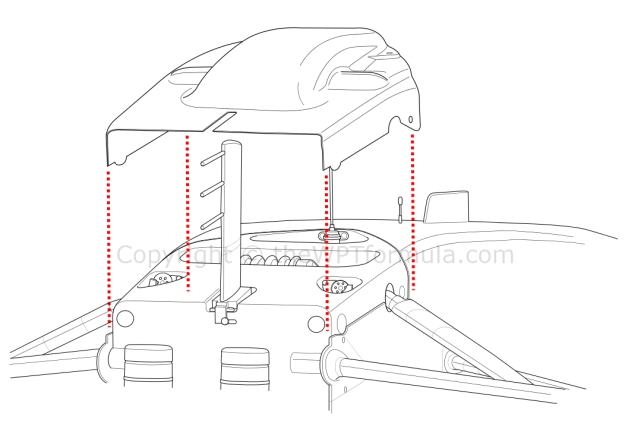 On closer inspection, however, it appears as if Mercedes were testing a dummy of the duct’s exit on top of the car, rather than a full duct assembly. As you can see in the illustration above, they have simply replaced the conventional panel that covers the inboard front suspension elements for one with an rearward facing duct and two interesting bulges eitherside.

Both drivers used the panel on Friday, with Rosberg’s duct taped up and Lewis Hamilton’s open.

There are a few intriguing details about this test that leave us questioning the direction they are taking with the device.

The bulges are positioned right above where the heave spring peeps out above the monocoque but, on the W06, the spring is sunk far enough into the chassis to not require any blisters in the bodywork above. This suggests that Mercedes are considering changing the suspension geometry for 2016 which would require a higher heave element position.

There was rumour that Hamilton ran a revised suspension layout in FP1, but these are not confirmed reports, so the team may have wanted to test the aero effect of a new suspension design.

Mercedes did indeed use flo-vis paint along the nose and the top of the chassis to investigate but considering that the duct wasn’t a fully operating assembly, we are left wondering as to what the purpose of doing it was.

My guess is that they are isolating the duct from the rest of the car to make sure that its introduction will not have a negative influence on the overall aerodynamics.

It is also worth noting that there was no obvious inlet at the bottom of car to provide air to any potential system they could be producing. However there is a very good explanation for this as Matt (SomersF1) has highlighted brilliantly in his blog post on the subject.

Unlike most teams on the grid, there are no visual signs that Mercedes have a driver cooling slot at the front of the car. There are, though, a few clues that suggest they do have an inlet hole in the underside of the nose, although sometimes an additional inlet is added on top of the car for hotter locations. This hole leads to a thin slot along the bottom of the front bulkhead which is visible when the nose of the car is off, before passing into the footwell of the cockpit.

Conventional S-ducts involve using a duct that covers over some of the internals in the front bulkhead, including things like the brake fluid reservoirs. This compromises the position of the duct’s exit point, which is often well ahead of the top flat surface of the chassis and instead along the upward curve from the nose backwards (defined by the regulations).

Mercedes could utilise their current driver cooling inlet by manufacturing an internal duct that exits through the aperture made for the heave spring, which coincidentally appears to be where the test panel’s duct exit begins. This allows the exit of the duct to sit nicely on top of the car, with air exiting in parallel to the chassis’ surface.

A drawback in doing such would be that air is passing around the heave spring and creating some turbulence, although it is difficult to judge how that would affect the duct’s performance.

I am sure we will get more details on it if it reappears before the year closes.

Although it has been ready since the US grand prix, it is only until now that Red Bull have opted to debut Renault’s new power unit in Brazil. It turns out the original token expenditure of 11 out of 12 is incorrect, instead the a partial upgrade of just 7 tokens was used. These were used solely on the combustion section of the engine, focusing on power output, driveability and fuel efficiency.

The remaining four are expected to be aimed at the turbocharger. This upgrade could not be introduced because of part availability and further changes needed to the exhaust system to make the upgrade work in unison. It is unclear whether Red Bull will want to use the full upgrade in Abu Dhabi, but considering that their ‘partnership’ with Renault is set to continue into 2016 I wouldn’t see a reason not to. Renault will also be quite keen to see how it performs on track, too.

Initially there was talk of a 0.1-0.2s laptime gain, but Daniel Ricciardo was in fact 7kph slower down the main straight than teammate Daniil Kvyat (who used the older spec unit). Whilst this seems a bit shocking at first, it would be unfair to say the upgrade has been a failure (yet). The final developments need to come through and the data analysed to fine-tune them in order to obtain a full assessment of Renault’s progress, but for now it doesn’t look great!

The Faenza-based team fancy their chances of grabbing sixth in the Constructors’ championship ahead of Lotus, as they sit just 9 points behind. Both drivers – Max Verstappen in particular – have hit good form and the STR10 certainly has the pace to match (barring straightline speed, of course).

To counter this deficit, Toro Rosso introduced yet another iteration of their rear wing by modifying the top flaps to reduce drag. Like Mercedes have done in the previous few seasons, the outer edges have been rounded down as they meet the endplate, reducing the angle of attack of the flap and decreasing the size of the wingtip vortices formed as result.