This post was requested by @robb___alexander on Twitter. I have another post coming up that was asked for via email so please get in touch and I’ll see what I can do as the summer break continues.

To say that a car has a “bad” feature would be incorrect – it’s rare that a team designs something bad. No team designs something bad because they have the data to tell them that it isn’t. However, there is a competitive order so clearly some cars have worse features than the top guys. In this piece I aim to dissect each car and pick a few plus a minor points from them.

Changing the minor points will not necessarily make the car quicker because it is all about the complete package. Take Mercedes as an example: if their power unit is so good, why do the manufacturer team still have such an advantage over the likes of Williams and McLaren? Their car overall is the performance benchmark and it is composed of a number of technical solutions that make it one of the most dominant cars in the sport’s history.

+ Superior aerodynamics. Standing trackside at Silverstone and watching the RB10 was a pleasure. The car looked so well balanced even in wet conditions and there was not even a hint of understeer. The aerodynamic package as a whole is clearly working harmoniously, but the front wing is arguably its centrepiece and has led all the other teams to copy their design philosophy. 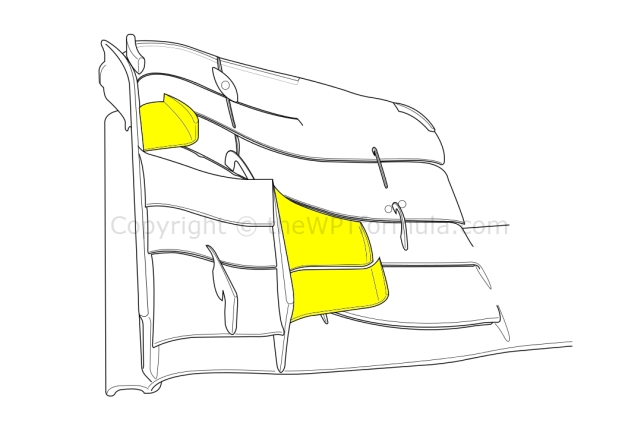 – Unfortunately the only thing holding the RB10 back is the Renault power unit (PU). Renault have vastly improved driveability thanks to software updates which utilise the ERS better but the ICE itself is about 60bhp down on the benchmark Mercedes. Other than that it is difficult to identify weaknesses.

Nico Rosberg said that the W05 is the most responsive and predictable car he has ever driven – that’s pretty impressive considering that the car is turbocharged and filled with complex systems.

– Like the Red Bull, it’s difficult to pinpoint anything wrong with the W05 – it’s the best car in F1. However reliability problems have hindered what could have been a perfect season. The Control Electronics (CE) unit failure on both cars in Canada could be particularly costly later in the year as it puts a strain on the 5 penalty-free replacements of the 6 key elements of the PU. Lewis Hamilton’s recent spat of issues have been unrelated to the car’s general reliability, however, as the fire in Hungary was caused by a fuel leak and the front right brake failure in Germany was due to a faulty silicon coating on a Brembo disc.

+ Whilst all the attention has been placed on the Mercedes and Renault PUs (for different reasons), Ferrari’s creation has received far less attention. In Monaco this changed slightly when their highly secret layout was revealed. Its packaging is arguably better than the Mercedes at a cost of overall power. It allows the team to pinch in the sidepods and shrink-wrap the rear bodywork to improve the aerodynamics. If I were a Honda engineer I would have seriously considered this design for 2015. 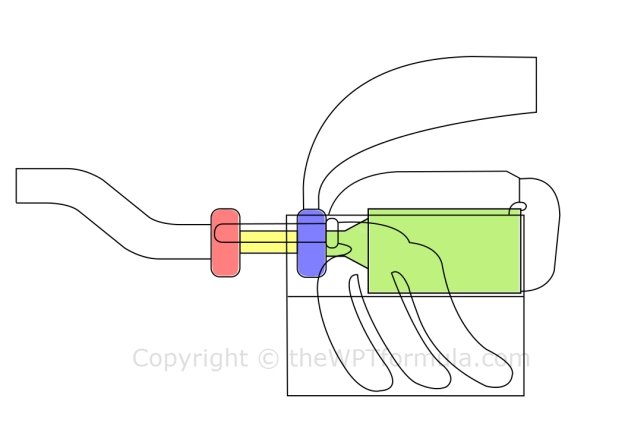 By placing the turbo’s intercooler within the V of the power unit, space is opened up in the sidepods which allows Ferrari to tighten the bodywork on its F14 T

– Every time we cut to an onboard shot of either Ferrari driver it looks like an eternal struggle to keep the car on track. The F14 T has a fair amount of downforce but it’s quite unusable at times. This is why a lot of designers are not in touch with their drivers as the numbers shown in the windtunnel and through CFD mostly tell them how much peak downforce is generated.

This is where Red Bull have thrived over the past 5 years as they create a stable aerodynamic platform across a wide range of speeds to give the driver confidence. The more confidence you can give the driver the more laptime there is available. Bolting on a new front wing that works brilliantly within a small threshold is not what the driver wants, even if the aero characteristics in that specific range of speeds is Mercedes-beating.

+ This may come as a surprise to you, but Lotus are – according to technical director Nick Chester – pretty satisfied with the E22’s aerodynamics. The twin-tusk asymmetric nose has worked well for them this year at high speed and repackaging the radiators and intercoolers over the past two months has allowed the team to extract more horsepower from its Renault PU. The Renault PU is very sensitive to charge air temperature so Lotus have made an effort to get as much air into the intercoolers as possible (openings behind the driver’s head in Germany) and as much hot air out of the sidepods as soon as possible (rearward opening on the left sidepod).

– Apart from the abysmal unreliability at the start of the year the car appears to suffer from a lot of induced drag as a result of the downforce generated. This, coupled with the fact that they have a Renault PU, has resulted in some patches of form but they really have been off the pace this year.

Around Spain/Monaco they appeared to be making some progress and developments on the PU software side and a new fuel from Total aimed to propel them ahead of Toro Rosso in the Constructors’ standings and challenge the likes of McLaren and Force India. Recently they have slipped back again, which gives you the impression that perhaps most of the PU updates are going to Red Bull first.

+ The MP4-29 appears to be a consistent car to drive which allows both drivers to get a fair amount of life out of the tyres. Developments have been coming through thick and fast this year as they continue to rebuild as a team. McLaren have never had a full hold on the current regulations (remember 2009?) and 2014 represents a year of restructuring. All things considered they aren’t doing too badly, but they aren’t fully to blame for their lack of pace relative to the other Mercedes-powered cars… 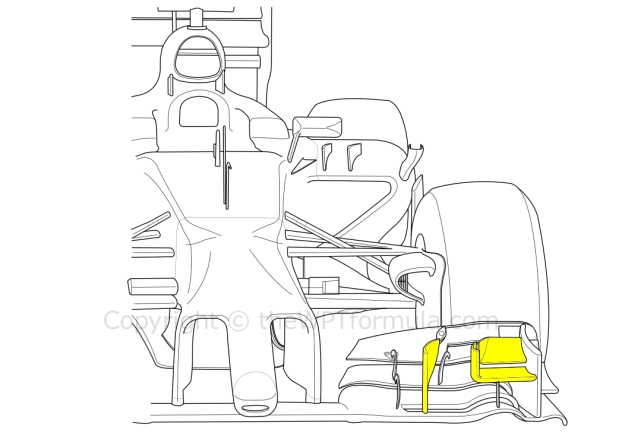 Recent developments have kept McLaren in the hunt for strong points, but strategy has cost them multiple times this year

– There are two main reasons why McLaren are slower than the competition: downforce and fuel. McLaren’s one lap pace in particular is not as strong because the drivers can’t get the tyres fully up to temperature for the beginning of the lap and this is a result of not having enough downforce. The problem for the team is that it’s global downforce – rather than either front or rear – that they need, which means that they have to take an overall look at the aerostructures and replace numerous components. For example, McLaren changed the front wing, splitter and diffuser all in a short space of time as they are designed to work together as one upgrade. This development process takes time.

Another negative point is McLaren’s use of Mobil 1 products. I have discussed it before on this blog but here are the fundamentals: running with Exxon fuel instead of Petronas – like all of the other Mercedes-powered teams – has two effects. The first is that overall power output is down as Petronas have been developing a fuel with Mercedes for over four years for the 2014 season, whereas ExxonMobil have developed their own without much guidance from Mercedes HPP.

The second pitfall is that all the software updates coming through are designed to extract the maximum from the Petronas fuelled ICE and the hybrid system. Therefore McLaren are at risk of losing further ground to its rivals as the season progresses, which puts further emphasis on finding more points of downforce over the second half of the year.

1 thought on “Analysis: The good and not-so-good of each car – Part 1”