The Australian Grand Prix was the first time we got to see which teams got pre-season testing right and finally discovered the genuine pace of this year’s crop. After every race this season, I will assess some of the key components that we saw appear on the cars over the race weekend.

Ferrari continued their evaluation of the under-chassis slot that they debuted at the very first test. The slot’s primary use is to reduce the build up of airflow where the base of the nose reaches the start of the downslope of the chassis, as this can affect the key components further downstream, such as the bargeboards and also the way the flow is fed beneath the splitter/T-tray/bib area, compromising the performance of the diffuser. It has a secondary use of cooling the drive and some of the electronic parts housed in the front bulkhead ahead of the pedals.

In the above image, the duct has been taped up so it can be easy to do a back-to-back comparison with or without the slot’s effect. On Saturday the team settled for the launch version of the front wing, which meant that the slot was not present for qualifying or the race. I expect it to return for Malaysia next week, as Australia is less about aerodynamic consistency but more about setting the car up to comply with the bumps, kerbs and traction zones that the semi-street circuit demands.

Lotus managed to bring a new floor and some small moderations to the front wing and bargeboards for Australia, although these were only on Kimi Raikonnen’s car on Friday, whereas Romain Grosjean only had a handful of laps on Saturday morning in the dry to assess them. This is perhaps why the Frenchman was quite far off the pace throughout the afternoon.

Above shows the three-stage elements of the new bargeboards that the team ran at the last test in Barcelona. Bargeboards have had limited treatment over the years, but as performance is becoming harder and harder to find it is unsurprising to see this area being developed once more along with brake ducts.

The three elements allow airflow to be turn a lot more tightly into the undercut of the sidepod and also at a higher velocity. This is because the three pieces act as, effectively, three separate miniature barge boards, each producing a vortex of their own combining to make one more powerful vortex as they meet. This effect can enhance parts downstream, particularly the central section of the diffuser. 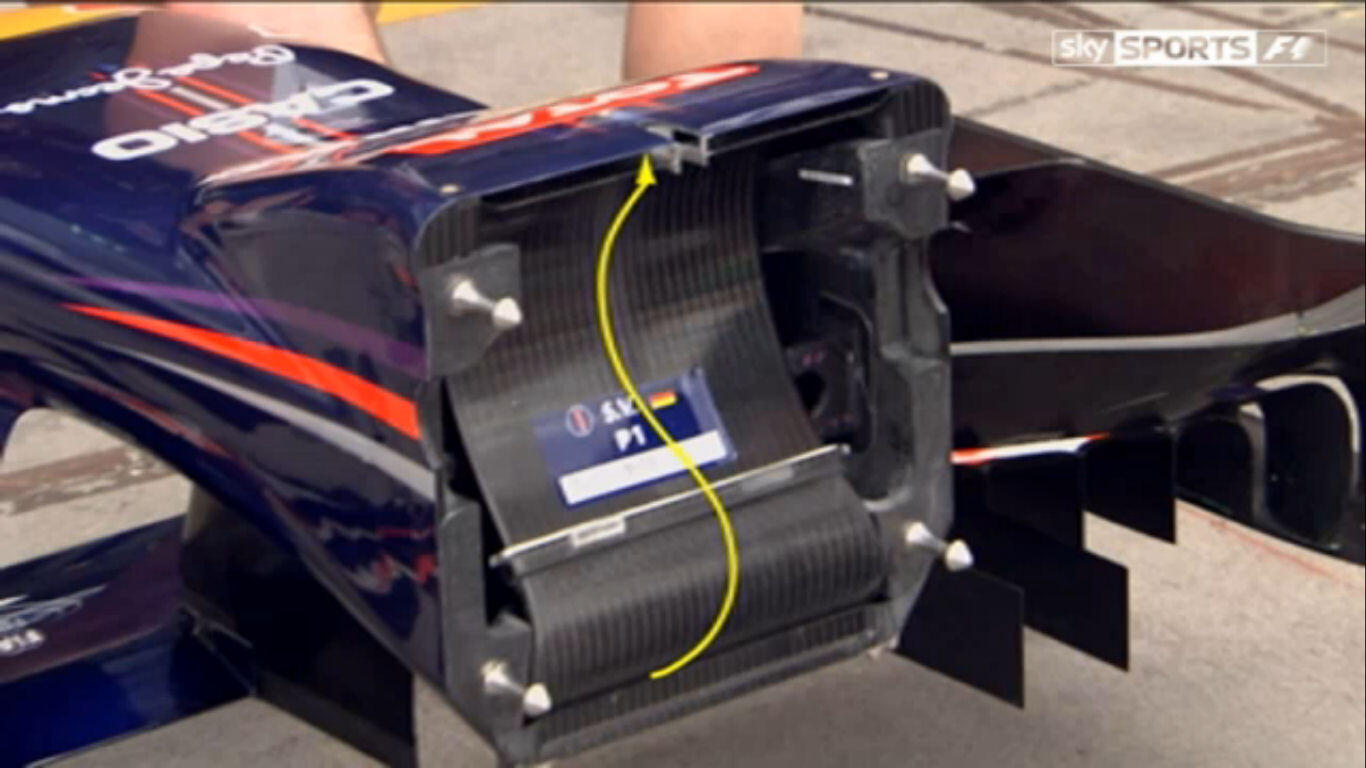 This low resolution image was highlighted on Sky Sports F1, and shows the ductwork in the Red Bull nose that feeds airflow from beneath the nose to the top of the chassis out of a rear facing slot to keep flow attached to the top of the chassis aft of the step. The rearward slot is visible at the base of the furthest forward telemetry aerial system (below image). The air is fed into a trough, created by the raised edges of the chassis that has been common on all Red Bull cars since 2009.

Why would you want to keep airflow attached to the top of the chassis? In basic terms, the step ahead of the raised section of the chassis acts as a sort of ramp, with high pressure building up as it passes over it. High pressure flow detaches itself from the bodywork and this can disturb how other components function downstream, particularly the airbox (critical in cooling the car’s engine and transmission systems) and central rear wing section.

Boundary layer air builds up beneath the chassis which can actually alter the path of the low pressure flow coming from under the nose. Red Bull have decided to exploit this layer by piping it up and blowing it out of the the slot on top of the chassis. This introduction of lower pressure flow helps reattach the high pressure flow that has been built up due to the buffering effect that the step creates.

Reattaching this flow aids the efficiency of the otherwise effected components above but it also stops flow spilling over the side of the chassis top to some extent. This prevents issues with the flow heading towards the sidepods and bargeboard area.

Because of the ‘S’ ducting, the original position of the brake fluid cylinders has been moved to accommodate it. Below is a diagram drawn by Giorgio Piola, showing how the cylinders have had to be housed in a carbon fibre shroud.

The team also continued to run with a slightly altered edition of its launch-spec front wing and not choosing to even test the new wing that we saw on Sebastian Vettel’s car on the penultimate day of Barcelona.

After a difficult first round, Williams will have to decide which direction they want to take their sidepod development following a poor showing on Saturday and Sunday. This was surprising as the team were genuinely optimistic about the FW35’s potential. Time will tell if they can turn it around.

In the mean time, the team reverted back to its launch specification sidepods – a semi-coanda (McLaren-style) system which, obviously, did not feature the illegal turning vanes. The ‘pods they introduced at the final test correlated with the move for Renault engined cars to switch to a full coanda ramp philosophy, although the Williams system was a slightly more basic concept as it did not appear to full optimise to under-tunnel area that Lotus and Red Bull have exploited. A few modifications and some more work with the Renault engine engineers may help them rebuild a fractured start to 2013.

If you liked these highlights, please leave some feedback in the comments section below and roll on KL next week!