A week to go until lights out Down Under, as this post explores the updates that the midfield teams have added to their cars to try to propel them further towards the leading pack.

Williams have been one of the many midfield teams that have made significant design changes to their car. You can see my analysis of the launch of the FW35 here – https://thewptformula.wordpress.com/2013/02/20/williams-fw35-launch/. Since then the team have introduced a number of updates to hopefully build on a solid 2012.

The biggest change to the car was the introduction of a Red Bull-style, full coanda exhaust system and getting rid of their previous semi-coanda (McLaren-style) solution with its controversial turning vanes. This change appears to be due to the Renault engine’s driveability and engine mapping and correlates with the fact that Lotus have also adopted this system. Having a full coanda ramp will allow the exhaust plume to be more efficiently guided to the area between the rear tyre and the floor edge by the downwash atop of the sidepod, but compromise the airflow from the undercut area feeding into the “coke bottle” region (where the bodywork narrows to meet the gearbox fairing).

The tunnel beneath the ramp is very small in comparison to the Red Bull and Lotus versions, although the jury is still out as to whether it is worth tunnelling the flow beneath the ramp anyway, as Red Bull have been taping up the tunnel during testing for further analysis.

This image shows how small the tunnel is (to the left of the Williams F1 logo). Also worth noting here is the small fence guiding the exhaust gases to the inside of the rear tyre. The small bulges in the floor are infrared sensors that monitor tyre and floor temperatures.

The team also continued to evaluate the two nosecone options (the launch version and a slightly lowered profile with the two camera housings attached in a hammerhead shark arrangement) and multiple front wing options. By the final day they had settled for what appeared to be the parts seen on the launch car. 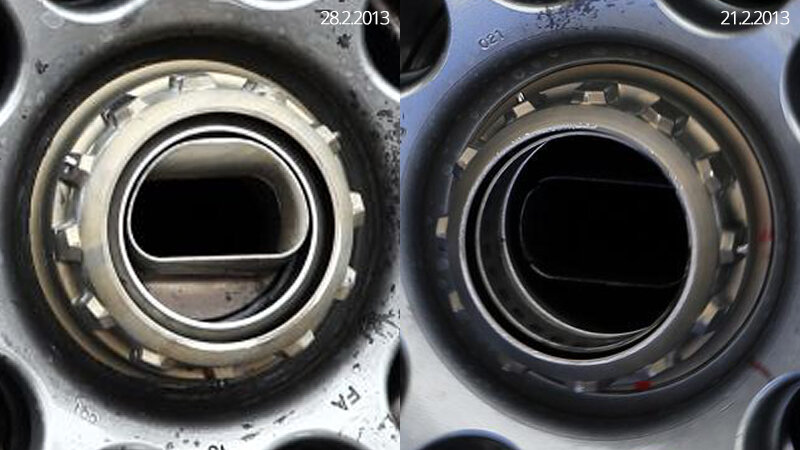 Williams also continued to evaluate their blown wheelnut concept. In the above image, the right picture shows the launch version of the hollow wheelnut complete with duct-work. On the left we see that they have slightly modified the angle and shape of the duct, creating a half-moon shape that covers roughly two thirds of the hollowed are angled very slightly upwards The duct also exits much closer to the edge of the wheelnut. These two characteristics suggest that they are trying to manage the wake that is induced from the top of the tyre, which may influence the way the downwash works along their new sidepod configuration.

Sauber brought very little in the way of major changes to the final test which shows that they must be satisfied with their small sidepod layout. It is interesting to see that despite having very small sidepods, the rear of the C32 is not as compact as almost all of the teams on the grid. This is probably because of the packaging restrictions that come with a new aerodynamic layout, as there are probably more issues in extracting hot air from the car in the tighter regions.

Although the new rear wing was introduced at the first Barcelona test, I thought it would be worth mentioning. The dipped central profile was used in conjunction with their own DRD device to try to stall the wing across a larger region. However, the team also ran this wing without the device as seen in the image above. Perhaps Sauber are getting a lot of blockage from their airbox which is not allowing enough substantial airflow to reach the central section of the rear wing, hence why they have profiled the wing in this way. The airboxes on all of the cars are the same surface area (despite their appearance) so I thought this was an interesting concept.

I have not seen enough images to justify this evaluation, but it could well be just the lower section of the wing that has been lowered rather than the whole of the profile. If we look at the top of the leading edge, it has very little curvature in comparison to the bottom. This suggests that, although there is a dip in the profile, it could just be the underside dropping away more than the top side. This may help accelerate flow beneath the central section and create lower pressure, but I am no expert.

Toro Rosso made a few subtle changes to their STR08 for first round. Unfortunately I do not have the images available to fully analyse these adjustments but I will do my best to describe and explain them to you.

This image shows the launch version of their rear wing, complete with strakes that are suspended from the endplates. The idea of the having strakes here is to expand and condition the airflow coming off of the rear tyre and brake ducts, working the inside of the rear wing endplate more to generate more downforce. Toro Rosso slightly changed the profile of the endplate and number of strakes for the final test, as well as adding a slot at the leading edge of the endplate to work the underside of the wing. This follows on from the Williams and Marussia designs that appeared last season.

The Italian team also subtly modified the wing mirror mounts, the actual mirror being vertically attached upon a horizontal blade, creating vortice generators that we see on many of the cars today to aid downwash over the sidepods.

With the confirmation of Adrian Sutil lining up as their second driver for 2013, Force India need to really start pushing on the development front. They brought very little in terms of aerodynamic updates to the final test, although we must not forget that most of the work done to make the VJM06 better than its predecessor is very much underneath the skin of the car

The continuity of deciding whether to run with or without the ‘r’ winglets stretched into the final test days. The winglets create vortices at their tips and control the flow coming off of the flap inboard of the wing and also help guide the flow from the central section of the wing towards the T-tray.

Another slight modification was the addition of an extra strake hanging from the each of the rear endplates, making a total of four slats. Force India also acutely changed the angle of the exhaust fairing relative to the floor. This was probably made to increase the downwash effect upon the exhaust plume, as they may have found the plume was being directed too far into the rear tyre. This should also solve any issues of overheating the rear tyres if they had any.